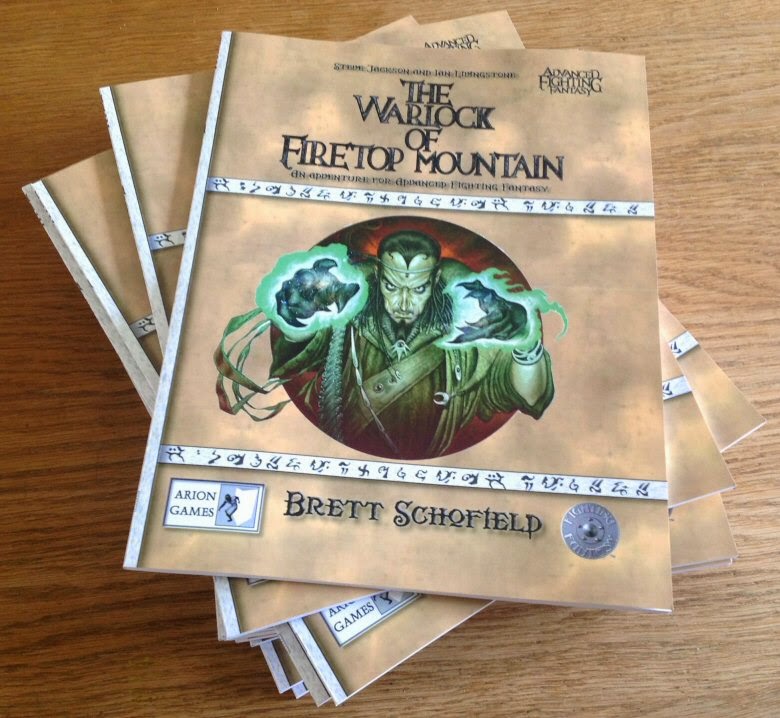 Well, it's been a long time in the making, but my AFF adaption of The Warlock of Firetop Mountain, that classic gamebook we all know and love, is about to be released. I started writing it about a year ago and intended for it to appear in an issue of Fighting Fantazine, but somehow we ended up here! The book features the classic illustrations of Russ Nicholson (including one or two little seen ones), the awesome Martin McKenna cover as well as some maps and other minor illustrations by yours truly. I will feature some closeup looks at some of these in a future post.

The book is a fairly faithful adaption of the original gamebook. I avoided adding any new pieces of lore to the FF world and instead tried to collate all of the various versions of The Warlock of Firetop that have been published over the years (the original gamebook, the Warlock magazine version, the boardgame, the Myriador d20 adaption - heck, even details from the Salamonis Gazette!) into one ultimate version of that iconic dungeon. Really the only version that I haven't included (I think) are the Nintendo DS game and the Commando Kiwi iphone game, and only because they vary so drastically from the original source material (and in my mind should be considered as alternate realities or perhaps future reinarcations of the infamous warlock - Son of Zagor anyone?).

Those lucky enough to attend the UKGamesExpo this weekend will have first dibs at the initial (very) limited print run. After that I believe it will be made available for purchase on the Arion Games website. I hope that you will all consider purchasing a copy and I look forward to your thoughts. Who knows, if it sells well enough you might be seeing The Citadel of Chaos before too long? If you have any questions, reviews, opinions, etc. on this I'd love to hear from you!

May your STAMINA never fail!

JEDIboyy
Look, I'm a simple man. I like burgers, heavy metal, Fighting Fantasy and the cool breeze through my flowing locks. I think we'll get along just fine.